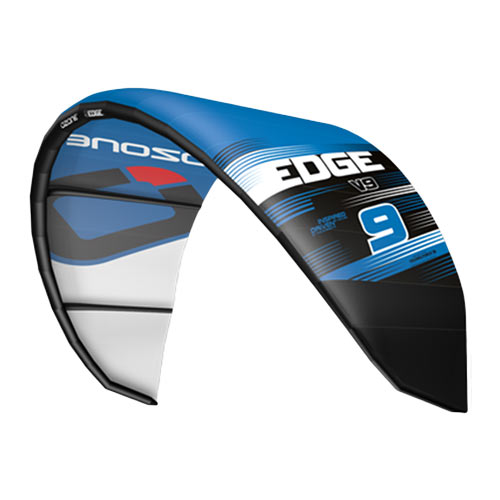 The Edge has a unique pedigree, well known to pack a serious punch! The latest version takes it to the next level - an explosive high adrenaline freeride machine that will leave you in withdrawal after every session. True addiction comes naturally with the Edge V9, the heavy hitter with an honest high!

The design brief for the ninth version of Edge was to radically improve free ride and big air potential, while maintaining its multiple World Championship winning speed and race performance.

We have completely re-worked the bar feeling, with the balance between front and rear line pressure optimised for feeling and improved pitch control. Riding the Edge V9 you can easily sense where the kite is at any time, the entire bar throw range offers a progressive feedback feel making it turn faster and easier to time the take off for going massive.

Continuous curve struts means we have higher levels of control over sail tension and reduced sail luff through the angle of attack range, giving a smoother ride with less bar bounce. The airfoil section has also been slightly modified for increased hang time, a small refinement but very noticeable in the air. The re-shaped wing tip section combined with re-positioned bridle attachment points increases drive in the turn and enhances load distribution for the leading edge. This directly translates to all-round high performance given any style of riding, all while going fast!

On any type of race or speed course the Edge V9 has a serious performance advantage – warp speed riding at amazing angles will have you clear ahead of the competition. Our unique low-drag pulley-less bridle system using high performance Kevlar line is 50% thinner than our standard bridle line, resulting in a vast reduction in parasitic drag increasing acceleration and range. Combined with the Race Control System and Race Flying Lines the Edge V9 truly is the leading performance LEI package.

On the SNOW! Yes that’s right, the Edge V9 is possibly the best inflatable kite in existence for taking advantage of the cold white stuff. Its got speed, power, and the best attribute is how easily you can get air - all you have to do is gain speed, edge hard and send it!

5 of 5
06/04/2018
This kite is amazing! It flys really good in any conditions. Has a lot of power and it jumps really good with alot of hang time.
Dylan

5 of 5
10/10/2017
I have been on the edge 9m, 10m and 13m and really liked all of them. They had great low end power and amazing up wind. Its a very high aspect kite that flies far forward in the window, giving you extremely good upwind riding maintaining good speed, and really cool vertical jumps with long hang time. Its really easy to keep track of where the kite is flying with a very nice easy pressure on the bar, and a direct feel to the kite. I had a blast boosting with this kite, you can go really fast and edge hard up wind maintaining speed. This gives for some really good air time when you send a jump. With the snappy and reliable turning of the edge, you can hang a little longer in the air by holding the kite above and send the kite down for landing at the last moment to get a smooth landing. The edge is a favorite for racing and boosting. They just had IKA twin tip racing in China and Brazil , for both Men and Boys 1st place was taken with the Ozone edge! Im not surprised. If you love going fast, easy upwind, high jumps and long hang time, the Edge will not let you down.
Displaying 1 - 2 (of 2 reviews)